The BEST way to Protest

The raucous disregard for law, order, and decency in our country, the societal bullying tantrums these last few months have pushed me to the edge of my patience — and then pushed again.

I – am – so – MAD about what’s going on!  Have we lost our ever-loving MINDS?!?  (Don’t answer that.) Some mornings I wonder on my way to the bathroom, “What will look back at me in the mirror this morning, a lion? Porcupine? Rattlesnake?”  It’s that bad.

Not long ago, in an attempt to keep from losing my temper and saying something I’d get fired for (It helps that I’m my own boss) I posted on social media:
Talk amongst yourselves.
Be ♥ Kind.
I’ll see you in January.

It felt good for about 48 hours, maybe a little longer.  Then I realized:

I have great friends all over the country! Why should I let the rogue and unruly keep me from them?  No!  I’m stronger than this. We’re better than this. I’m not going to just hand this country to them. Not on MY watch, you don’t.

On my walk that evening, I began to wonder, “What would it look like if I staged a protest? Even if it’s just me. What would make it different? A cut-above. Patriotic. Stellar. Quietly powerful.”
I felt determination’s quiet, lion-like rumble begin to grow in my chest.  “What would be the BEST protest? The BEST demonstration?  What would characterize it?”  My list found its way to paper and then into this image: 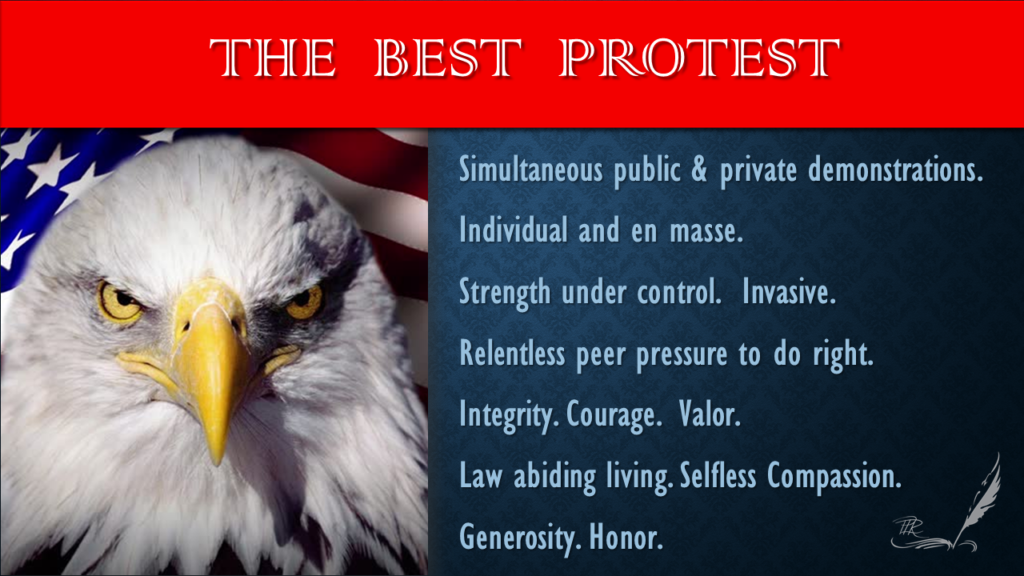 This protest is not destructive.  Quite the opposite, it’s restorative. It’s not silent, but neither is it raucous. Its voice is clear. Controlled. Confident.

Almost 10 years ago when our country was attacked, we promised each other we’d Never Forget. Remember?  Well, guess what? The same alarm sounds when Liberty’s foes live here.
No free passes. ‘Fraid not.

See the determination in that eagle’s eyes?  He’s done with this.
So am I. I’ve undone my “c-ya later” on social media and am officially quietly protesting while I work. when I shop. drive. worship. relax. I’m not suddenly becoming an activist, Lord knows I’ve more to do in a day than I can get done. This protest is more about how I do what I do. How I shield my heart & mind from corrosives while encouraging the people near me to take the high road again.

This protest will last more than a weekend.  For all we know, it could intensify. It could take a long time. While you’ll not be arrested (you may get a smile and “Thanks” from folks in uniform), many will hate us. Call us names.  Try to harm.  Laws —like our country’s history— don’t apply to them, or so they think. When things get ugly, strength under control may be harder than we think. But determination and quiet resolve will endure. So will law and order.

If our protest swells and spreads, we may be surprised at its effectiveness.  But even if not, this American has had it. I refuse to take this sitting down.

We’re better than this.  Or we were.  It’s time to reclaim The United States of America’s honor, which commands the world’s respect  Or did. It can again.

Let it begin with me.

(Feel free to help yourself to the pictures here and share in their current form if you feel the same. Right-click and save should do it. The .png version above is a larger file than this .jpeg version.) 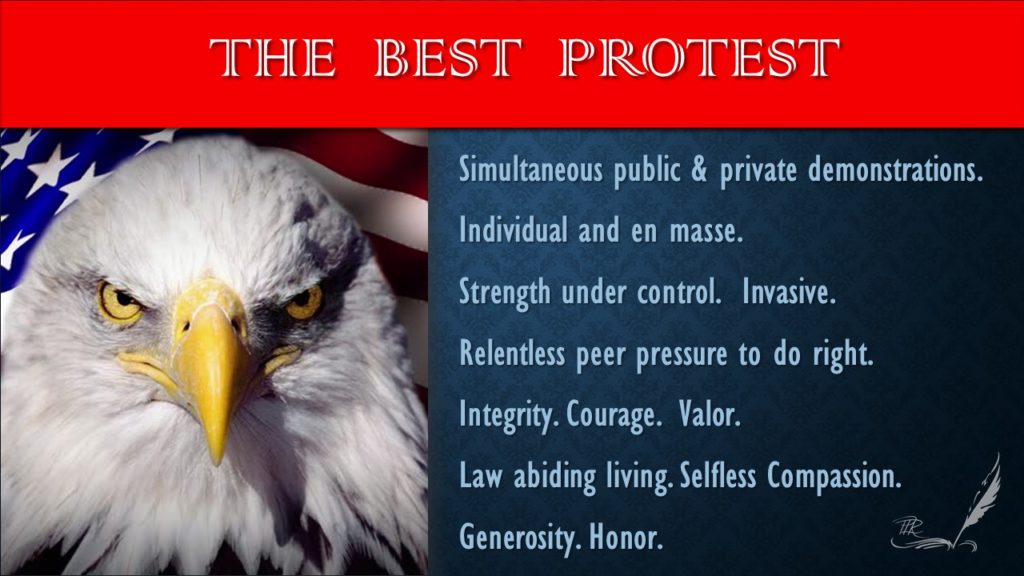