So let’s see, I’m writing about “Free-Write” today but I’m not really sure where I should start. I could mention –  I will mention – that I first learned of it in a graduate class, Writing With Skill and Influence. Dr. Jerry Jenkins was one of the two professors for the course and I learned a ton from him.

We were talking about writer’s block, and he told us about the device he uses that prevents writer’s block entirely. Never happens.  His solution? Free write. 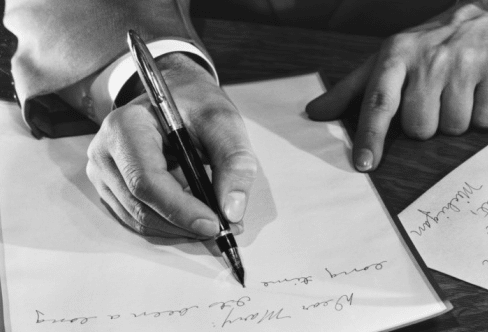 So you sit down to write —that’s what writing looks like, by the way; Seat of the pants in the seat of the chair!— pen in hand or fingers over the keyboard and you write every thought that comes to mind.  Some your editor will never see, they won’t last long at all, but to get the words on the page you must UN-cap it, (the opposite of Cap it and Focus, a recent post here) and let the words flow, even if they’re not on subject. Believe it or not, that’s part of the discipline of it… keeping the thoughts flowing.

This coffee is good.

Jenkins mentioned that even when we’re not free-writing, the real beginning of our project may be five or six paragraphs in.  Good to know.  So he encouraged us not to get too attached to what we first write when we’re getting started.  Come back later in re-write / edit mode. Toss the  junk, Keep the best. Then edit, edit, edit.

I’ve since come to think of it as similar, in a way, to when I want a drink from the garden hose on a hot summer day.  Yes it’s OK to do that, farmers, gardeners and ranchers have been drinking from things today’s persnickety nutritionists would reject as totally unhealthy, and lived longer than anyone thought they would.

When it’s time for a drink, chances are good the water in that hose is hot at first.  The sun has heated it in the hose and I’m not interested in that.  So I open the spigot, let it run, waiting for the cool, then the cold.

Free-write does that with content flow. I don’t keep much of what flows from my pen those first several paragraphs.   I don’t keep when my mind wanders  (it’s 8:03, I’ve got time) or when something interrupts my train of thought.   My dad had a little hand-made sign on his desk when I was growing up
“It’s hard to get a good train of thought going when you can’t even build a decent car.”
I’m not sure if he used free-writing or not; somehow I doubt it.  Some of my cars are built with thoughts and concepts that pop up while I’m free-writing.

When I’m writing by hand and I see something I know I want to keep I put an asterisk or ! in the margin to remind me to look here when I come back in re-write and edit mode.  “ping“   Email. Shall I look?  I shouldn’t.  But I will.   Ok, it’s nothing personal, it’ll keep.  Normally I don’t look, not sure why I did just now.

So free-write. It’s a get the ink flowing and get to the good stuff.  Getting a drink, it’s get rid of the warm water and get to the cold & refreshing.  Writing, it’s move through the cool and lukewarm ink and in to where it’s warm and flowing freely.