Coach can reassure you it’s not the end of the world, but it feels like it.
Your parents in the bleachers may make it a point to stand up so you can see them cheer you on and all you want is for them to sit down. Your girlfriend may try to meet your eyes every time you come down the floor on defense – and you avoid looking at her.  The cheerleaders and pep band start working together to get the crowd into the game, your 6th man, and you wish they’d hush.

But it’s not the end of the world. Though it feels like it.

I remember one such incident when I was growing up. Coach Tangne called time-out. A soft-spoken gentleman, super-methodical about the way he did things, he called us in close. We had to lean in to hear him.  “So where are we? Let’s have a look,” he said.

He pointed out that none of us were close to fouling out. We have room to play hard. Even aggressive.  He reminded us that we know and have drilled the full-court press.  He told us the instant he sensed that it would help us he’d signal to switch to it – hopefully a minute before their coach expected him to. He reminded us the refs were calling a fair game, nobody’s getting jipped.

And then he reminded us that we can only score one basket, one free-throw at a time. “So let’s do that,” he smiled, “let’s surprise some people – one bucket at a time.”  We left the huddle and headed back onto the court, ready to go again.  I don’t remember if we won or lost that game. I just remember “we can, we can, we can,” pounding in my chest when the ref whistled the end of the time-out.  I was only in 7th grade, but that lesson stuck.

Years later, in a different setting, Dad did something similar. Talking through an uncomfortable situation Dad said in his quiet way, “When you’re counting your blessings, it’s okay if some of them begin with ‘well at least…’”

Coach would have said, “Well at least none of us are in foul trouble. At least we know how to full-court press —and we will. At least the refs are calling a fair game, at least the ball still fits through the hoop. Let’s do that.”

Listening and talking with people these days, the whole nation seems to feel like it’s late in the 3rd  quarter and we’re down by 12. 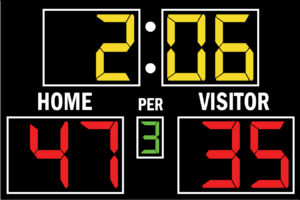 Many feel helpless.
Some are hopeful – or pretend to be.
Some are mad. They don’t know what at, they’re just mad.
Some up near the top of the bleachers shout down to the players and coaches, telling them what to do. They’re out of shape and over-opinionated, but they have voices everybody can hear.
Some hold their breath, their faces buried in their hands: “How many minutes more?”
Some try to praise, encourage, maybe start a rally.
Some —and you already know if this is you— know you’re the point guard right now for your business, your department, family, city, church, school. You are in hyper mode. You’re talking to your teammates on defense, giving away your opponent’s position, maybe even the play. You push yourself forward with the same breath you push back the fear pounding in your chest.

I heard 30-seconds too much of the news tonight before supper. Our governor is considering extending Wisconsin’s Safer at Home another month.  My heart sank.

I can’t retaliate, that would result in a flagrant foul. I can’t quit, that’s defeat. But doggone-it it’s hard to win with this going on.

I’ve scrawled in my thinking a short list of well-at-leasts to keep me moving.

I’ve picked which points -which baskets- are most-likely to go in.

I’ve reminded myself Whose I am and that none of His resources are affected by market volatility;
He leads me by STILL waters.

One. Incremental. Success.  One step.

I don’t expect to hear “well-done, good and faithful”. The game’s not over and it’s really loud in here! I do see when He smiles, though. I do see that celebratory fist-clench and I can lip-read His “Yes!”  Any minute now, He’s going to give me the signal  “Full court press. Go.”  I’m ready. This is not a fun game for anyone.  But I love my Coach and He loves me. I’ll bring my best to this next play. When it’s done, the next. Then one more. One more.

The outcome of this game is not my call. But my effort right here right now sure is.
And Somebody – with a capital S – deserves my BEST.

Love so amazing, so divine, demands my life,
my soul,
my all.

That’s true no matter what quarter it is; No matter how much time is -or isn’t- on the clock.