Of Bells and Griddles

Of Bells and Griddles

The sixteen-voice mixed ensemble I sang in as a college freshman was promising but not great, especially not at first. We rehearsed on campus in Peterson Chapel, an acoustically-live room that could seat 150 people — if they sat close together.

Our conductor, Mr. Robert Sulahian, a small, dark-featured man, brought warm intensity into the room every time he came through the door. I’d not encountered that quality much -if at all- growing up on the high plains and in the Colorado Rockies. I was more accustomed to even-tempered, hard-working folks who sprinkled humor on everyday life, seasoning or sweetening to taste. So to sing for passion under control for an hour each day was new to me. I liked it! I soon came to respect Mr. Sulahian, and then emulate him. I was a music major, voice with an emphasis on conducting, and I studied his conducting technique singing bass in his ensemble.

Sulahian had a way of shrinking the size of his conducting zone as a song neared performance-ready, to a shoulders-wide, chin to belt buckle rectangle. “People don’t need to watch me,” he schooled us, “only you do.  They need to see and hear you, I’m here to help you sing these songs very well.” I later made that technique my own, especially on quiet pieces.

Carol of the Bells (Leontovich / Wilhousky) was one of our favorites. But as October became November, Sulahian was not satisfied with it. We weren’t listening to each other well enough to sufficiently align all those s-es. “Not bad,” he’d say, “It still sounds like a reptile garden in places, a lot of hissing,” and his dark eyes would twinkle – he liked us. “But the blend is good.”

We kept trying, wanting to do better. He taught us how to make the s at the end of bells share with the beginning of sweet:
Hark how the bellsweet silver bells.
He taught us where to place our sound so we sang light and airy on this piece, not heavy and ponderous.
“Don’t wear boots through here. Tip-toe.”  It helped, but apparently not enough.

One day, still not satisfied with all those s-es, he stopped mid-song. A distant look came to his eye as he pictured something. “So you’re home for Christmas break, and Christmas is at Grandpa and Grandmas –as always. You and some of your cousins are sleeping in the loft again. You have since you were little, and you sat up talking and laughing (quietly) after everyone went to bed Christmas Eve. Christmas morning, the smell of frying bacon awakens you. Grandma’s up already.”  He smiled, knowing we were with him, though we didn’t yet know why the story. ”So you tiptoe down the stairs in your stocking feet and toward the kitchen to say Good morning, Merry Christmas, and see if you can help at all. You step into the kitchen just in time to see Grandma dip her finger into a glass of water and flick a drop of water out over the griddle to see if it’s hot enough.  (Pancakes!)   If it’s hot enough, what happens?”

“The water drop bounces across the griddle and evaporates.”
It was one of the girls – basses don’t know that stuff.

He let the image soak in a moment, then said: “Let’s try it.”
Apparently, it worked!

He beamed as we sang, better now, all the way through.
“Ding .. dong ding .. donnng.”  His miniature cut-off helped us finish together.

“You sound GOOD! Do it like that every time!”

We kept practicing that piece along with the others in our repertoire, using his imagery on Carol of the Bells to help tighten our precision.

The day arrived that we sang it in performance. The room full of silently expectant people behind Mr. Sulahian tempted us to look, but we fixated on his hands, poised for the up– then downbeat. 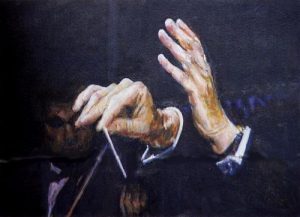 All sixteen of us smiled. Sulahian added his smile to ours the moment he heard what he’d been striving for. The hard work and discipline paid off as we synchronized with his hands, listening intently to each other. We did it! We sang it well!

To this day, storytelling to help people reach the desired result is a favorite of mine.

I’m sure Mr. Sulahian never intended for a freshman bass to remember his story for over 45 years – his aim was short-range. And it worked. But as is often the case, the application sometimes takes on a life of its own. So tell the stories. Make them fun. Memorable. With a purpose. And if someone younger rolls their eyes, “Not that one again,” just smile. “It’s OK, someday you’ll tell it.”

END_OF_DOCUMENT_TOKEN_TO_BE_REPLACED

Universal Equality – The One Place You Already Have It

In your quest for universally equal allotments, on all continents, unaffected by heritage,...